Just recovering from a busy but fantastic weekend, the highlight of which was a trip to the British Grand Prix. I’ve never been before, but we’re big fans and watch most of the races on TV. My dad and brother went last year and enjoyed it so much that we all decided to get tickets for this year’s race.

I wasn’t completely sure what to expect and was surprised by how much faster and louder it was in real life.

I was hoping to get a few good shots of the cars but gave up on that pretty quickly.  These two give a bit of a feel for the crowd, circuit and the atmosphere. 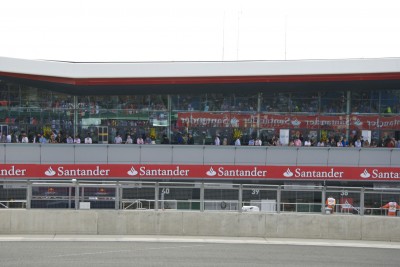 It was a good race although I did find myself hoping that someone would crash just to add to the entertainment! Shame to see Button go out due to the mistake in the pit stop, but “Well Done” to Alonso on his win.