I recently went on a trip to the World War One battlefields of Ypres and the Somme. It made, and continues to make, a true impression on me. The trip went from the very first stages of war to the last. We drove along the routes that the soldiers would have been brought along to reach the front line; we saw the trenches and went to the front line; we visited the casualty clearing stations and a town that soldiers were sent to during their rest period from front line fighting; and finally we remembered all those who lost their lives at some of the many cemeteries and memorials. I honestly believe that everyone should make this trip or something similar in order to understand the real bravery of the soldiers fighting then and now. It will make Remembrance Day so much more meaningful to me.

One of the most moving moments of the trip was the Last Post ceremony that we attended at the Menim Gate. Volunteers from the local fire brigade have played the Last Post there every single evening at 8pm since 1927. The Menim Gate holds the names of over 54,000 men whose bodies were never recovered. This photo shows part of the Menim Gate with an impressive night-time sky. 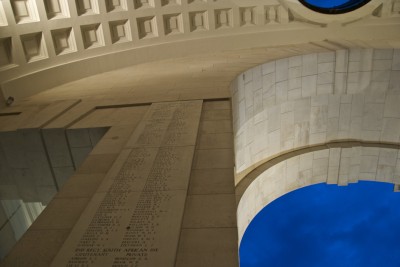